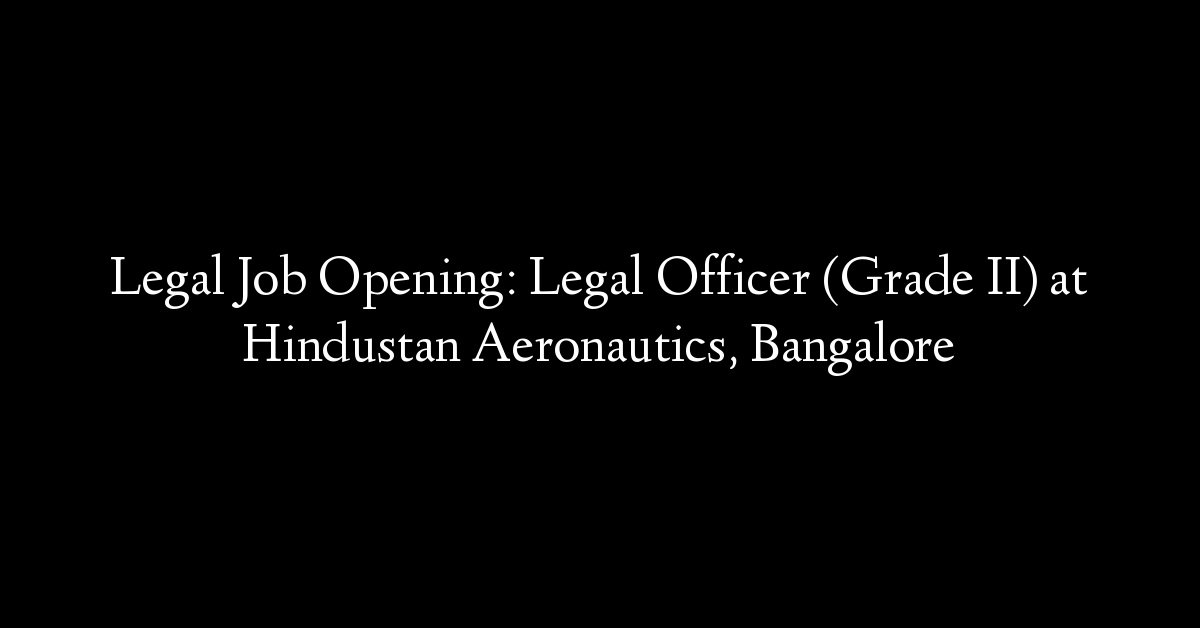 Hindustan Aircraft Limited, incorporated on 23 Dec 1940 at Bangalore with the aim of manufacturing aircraft in India is looking for Legal Officer (Grade II) for their Corporate Office at Bangalore.

– Should be able to effectively co-ordinate with the Advocates and other Legal Authorities in connection with the litigations of the Company;

– Should be able to effectively represent and appear on behalf of the Company before various Statutory and Quasi-Judicial Authorities in connection with matters relating to the Company;

– Should have sound drafting skills and be able to draft various legal documents;

– Should have sound Contract / Agreements vetting and drafting skills;

– Should be abreast with the latest legal developments, amendments, etc.

The history and growth of the Hindustan Aeronautics Limited are synonymous with the growth of the Aeronautical industry in India for more than 77 years. The Company which had its origin as the Hindustan Aircraft Limited was incorporated on 23 Dec 1940 at Bangalore by Shri Walchand Hirachand a farsighted visionary in association with the Government of Mysore with an Authorised Capital of Rs.4 crores (Paid up capital Rs.40 lakhs) and with the aim of manufacturing aircraft in India. In March 1941, the Government of India became one of the shareholders in the Company holding 1/3 of its paid-up capital and subsequently took over its management in 1942. In collaboration with the Inter Continental Aircraft Company of USA, Hindustan Aircraft Company commenced its business of manufacturing of Harlow Trainer, Curtiss Hawk Fighter and Vultee Bomber Aircraft.

The Company had built aircraft and engines of foreign design under licence, such as Prentice, Vampire and Gnat aircraft. It also undertook the design and development of aircraft indigenously. In August 1951, the HT-2 Trainer aircraft, designed and produced by the company under the able leadership of Dr. V.M.Ghatge flew for the first time. Over 150 Trainers were manufactured and supplied to the Indian Air Force and other customers. With the gradual building up of its design capability, the company successfully designed and developed four other aircraft i.e. two seater ‘Pushpak’ suitable for flying clubs,  ‘Krishak’ for Air Observatory Post(AOP) role, HF-24 Jet Fighter ‘(Marut)’ and the HJT-16 Basic Jet Trainer ‘(Kiran)’.

Meanwhile, in August 1963, Aeronautics India Limited (AIL) was incorporated as a Company wholly owned by the Government of India to undertake the manufacture of  the MiG-21 aircraft under licence. In June 1964, the Aircraft Manufacturing Depot which was set up in 1960 as an Air Force unit to produce the Airframe for the HS-748 transport aircraft was transferred to AIL. Soon thereafter, the Government decided to amalgamate Hindustan Aircraft Limited, with AIL so as to conserve resources in the field of aviation where the technical talent in the country was limited and to enable the activities of all the aircraft manufacturing units to be planned and co-ordinated in the most efficient and economical manner.

Amalgamation of the two companies i.e. Hindustan Aircraft Limited and Aeronautics India Limited was brought about on 1st Oct 1964 by an Amalgamation order issued by the Government of India and the Company after the amalgamation was named as “Hindustan Aeronautics Limited (HAL)” with its principal business being design, development, manufacture, repair and overhaul of aircraft, helicopter, engines and related systems like avionics, instruments and accessories.

Learn Legal Drafting and increase your chance of getting your dream legal job or Internship.